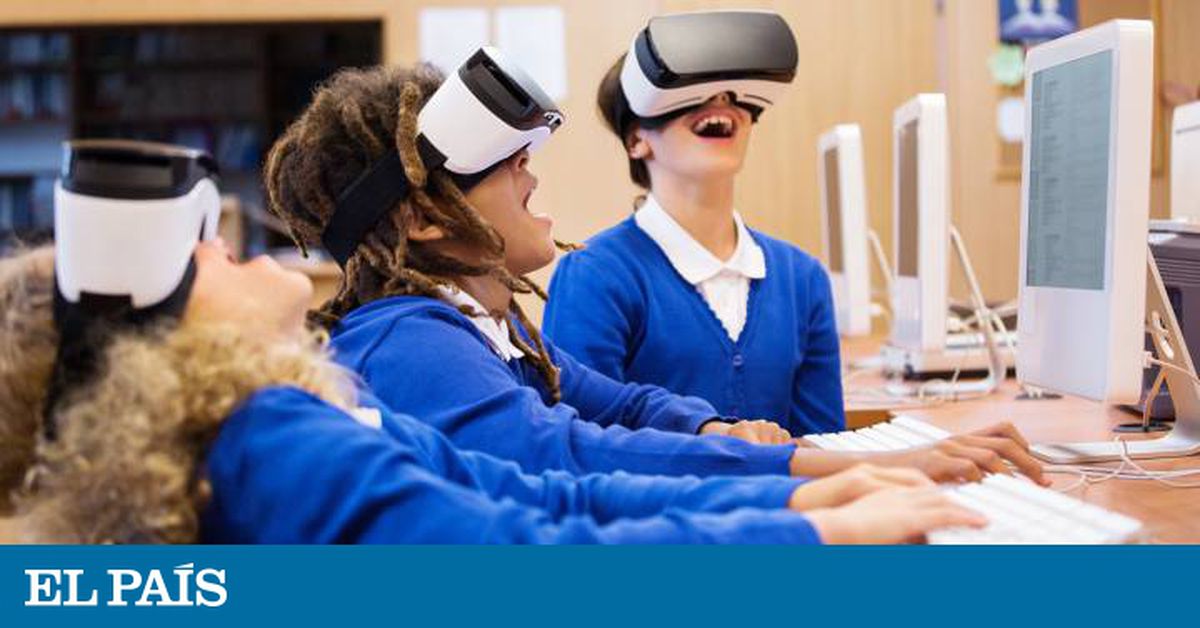 The premise is as simple as it is didactically perfect: learn in interactive environments that seem real, where mistakes can be made without suffering their consequences and that manage to enhance the effectiveness of learning. Virtual reality (VR) is no longer a futuristic idea to now offer immersive experiences with immersive images and sound that allow the student to live each situation from different points of view, analyze the consequences of their decisions and even the time it takes to respond to each question. And best of all, it does so in a completely accessible way, since, although there are VR glasses starting at 300 euros (standalone), there are also plastic or cardboard ones starting at just eight, which work by inserting them the user’s mobile phone and with a more than acceptable quality.

The ease of this method, in which only 3D glasses and a smartphone are needed, has increased the interest in this type of teaching during the pandemic, especially in relation to Health Sciences, but also in disciplines such as Art , Neuroscience, learning in soft skills such as communication, conflict resolution or social and emotional intelligence, gender violence and even occupational risk prevention. The environments can have a videogame aesthetic and feature avatars, or use real images and characters with 360º videos and interactivity. It is about “immersing the user in a highly realistic scenario in which he is the active protagonist of a learning story, where he must make decisions that determine the course of it,” says Luis Villarejo, CEO of Immersium Studio, a spin-off. off of the Universitat Oberta de Catalunya (UOC) specialized in VR projects.

If, for example, it is about training health professionals on how to communicate bad news, the student is immersed in a hospital environment where they interact with a patient and their family. Depending on the steps you take, it will affect the course of the story in one way or another, triggering different reactions: “If the professional does not adequately explain that the patient is brain dead, the parents feel confused and leave the room because they want to see their son. But if he explains it properly, the user faces the process of acceptance by the family, ”explains Villarejo. The objective is that the student learns by experiencing the emotions and feelings that he will experience when facing the real situation; that he makes mistakes and can go back, comparing the consequences of different decisions, and thus he is better prepared to react to them in the development of his professional career. In addition, “virtual reality allows and enhances scaffolding methodologies, which progressively withdraw aid from those who are learning,” adds Alicia Torres, head of the Training and Teaching Innovation Unit at Loyola University.

VR, a complementary and differentiating tool

“What I offer thanks to the use of VR is real and experiential learning based on understanding, which is not forgotten. It is important to understand that the educational system has to break with the walls of the classroom; that we have many more resources for teaching and that, thanks to this methodology, we get the student to be the one who wants to learn and is interested, increasing their learning in a notable way”, assures Ana Valtierra, professor of Art at the Faculty of Education of Camilo José Cela University (UCJC). Villarejo expresses himself in the same sense: if the projects are well designed (according to pedagogical objectives and criteria and with the know-how of professionals in the sector, including a multidisciplinary team of pedagogues, communicators, experts in user experience, cinematographers, technologists and creatives), the improvements can be very significant, the retention capacity can increase up to four times and the training period can be shortened by up to half.

This technology also saves time for trainers, who are not forced to repeat the same workshop over and over again; to be able to access the content at any time and place, and to improve the empathy and emotional intelligence of the user, allowing them to live the same situations from different perspectives: “For example, we are in a European project that generates experiential experiences in VR for students of nursing. We put them in situations in which, as professionals, they will have to make decisions about a patient in the presence of a family member and a colleague from the hospital, and at the end of the process they can relive that process from the point of view of the patient, the family member and of the companion, presenting in the first person how these people have felt it”, details Villarejo.

In what fields is it useful?

Virtual reality may be acquiring special relevance due to the pandemic, but research in this field has been going on for years, especially in areas related to health. The C19 Space, developed by Immersium in collaboration with the European Commission and the European Society of Intensive Care Medicine, has helped more than 20,000 European healthcare professionals to prepare to work in ICUs if the intensity of possible new waves of covid made it necessary, while that two other projects (Family Approach and TPM Journey) have served to train them in the communication of bad news and consent for human organ and tissue donation. INDOVIG, in turn, is a cooperation project between the Pompeu Fabra University, the Sant Joan de Déu hospital, the University of Vic – Central University of Catalonia and Immersium so that students of Medicine, Nursing, Physiotherapy, Occupational Therapy and cycles Higher Degree training in Social Integration can be trained, through an immersive simulation, in the treatment of victims of gender violence that they could see in their consultations.

In the La Paz hospital in Madrid, VR is already used as a distraction tool against pain for pediatric patients transplanted for liver disease, and a new U-tad project, in collaboration with the hospital and the HEPA association, will also make it in a therapeutic tool, helping them to relax, to become aware of their ailment and to promote in them habits that improve their state of health. In addition, “with CicerOn VR: Virtual Speed ​​Coach, the research team intends to offer a tool that facilitates training for overcoming phobias for adolescent users with Asperger syndrome, using immersive and gamification techniques”, explains Laura Raya, postgraduate director of virtual reality in U-tad. And at Loyola University, Psychology and Neuropsychology students use VR in the Human Neuroscience lab for cognitive assessment activities (attention, memory, spatial orientation, cognitive functions).

For Ana Valtierra, VR has radically changed the way she teaches Art classes at UCJC, with a double objective: to show future teachers that there are complete and fun ways of learning that have nothing to do with rote teaching, and to teach aspects of the History of Art that have been lost over time: “We preserve many works of art and even entire cities in a fragmented state, and archaeological sites that, although they preserve their essence, were full of offerings made of precious materials that are not they have come down to us. As much as they tell us, it is difficult to abstract from what these cities, churches or monuments were like and get an idea of ​​their impact on visitors”.

Virtual reality, through 3D glasses, mobile phones and even the computer, can help to perceive some aspects that completely change the imaginary that is popularly held about Antiquity: “Also, for example, at the level of polychromy, because almost all the architecture of Antiquity and the Middle Ages was painted; a building was not conceived until it was polychromed. VR traces that bridge between what is preserved and what is real, so that students can dimension works of art in their context”.

A student from the Camilo José Cela University uses VR glasses at the National Archaeological Museum.Valtierra

When talking about virtual reality, it is common to think of those futuristic 3D glasses and virtual environments like the ones described in this report, but it can also be worked from a video game environment from a laptop, desktop or tablet. Valtierra recalls that “there are true works of art of reconstruction of, for example, classical Greece, in the sanctuary of Delphi or in the Acropolis of Athens, which can be visited even seeing its citizens work, walk around the city or speak to us in Greek ”.

Since 2011, at the Complutense University of Madrid (UCM), Medicine and Nursing students have mainly been using educational video games to facilitate their first contact with real operating rooms and train them in essential surgical verification practices (LVQ) during the intervention. “Traditionally, surgical techniques have been tested, in addition to the progressive delegation of actions by experienced surgeons, through practices on cadavers and animal models, but which can be replaced by simulators,” says Manel Giner, Professor of Surgery and Vice Dean of Quality and Postgraduate of the UCM. The use of these video games, he adds, aroused the interest of students and teachers, “and reduces fear, increases knowledge about how to act, reduces errors and improves the attitude of students who use it.”

In addition to the improvement of the devices in terms of power and autonomy, one of the biggest multiplying factors that are yet to come is the integration of biometric sensors: “To have, at the user level, VR glasses that integrate a heart rate sensor , a follow-up of pupillary activity or haptic devices such as gloves or suits that simulate touch and temperature will make the training experiences take a leap in quality, not only in the sensations that we will generate in the users but also in the reflection on the learning situations and its impact”, wields Villarejo.

If you are interested in developing a professional career within the field of VR, there are different possibilities. The University center U-tad, for example, offers an official Master’s Degree in Computer Graphics, Virtual Reality and Simulation, of 600 hours, for graduate students in technical specialties such as Computer Engineering, Telecommunications, Mathematics, Physics or Multimedia or Industrial Engineering, where They will learn the management and programming of graphics engines such as Unity and Unreal, programming in C++, C# and Python, the management of software such as AR Spark, AR Foundation, Vuforia and the programming of Virtual Reality glasses such as Oculus Quest, Oculus Rift, HTC Vive, Magic Leap or Hololens 2.

But there is also the option of training with a non-technical profile. For these students, U-tad has developed the Development Expert training for Virtual, Augmented and Mixed Reality (300 hours), “aimed at those who wish to delve into the design and development of immersive experiences, through the acquisition of skills related to the production of a VR application and learning concepts about conceptual design, scripting, art, sound, programming and production of virtual, augmented and mixed reality”, explains Raya. The requirement is to have an Intermediate or Higher Vocational Training degree or a university degree.