Sony continues betting on virtual reality in video games as one of its distinctive technologies, and has announced the PlayStation VR2. It has done so without showing its design and without giving too much information about the successor to PlayStation VR, just a logo and its first specifications, so we will still have to wait to see the design.

What is clear is that Sony continues to bet on this technology as one of those that differentiates the PlayStation 5 from the rest of the consoles, since neither Nintendo nor Microsoft seems to have decided to enter virtual reality yet. Next we will tell you the first details we know after Sony’s announcement.

First traces of the next gen of virtual reality

Sony has presented its new VR system without revealing its design, although it has shown us its main specifications. In them, we see that they continue betting on the OLED on the screen, although offering a resolution of 2000 x 2040 per eye. This is a huge improvement over the 960×1080 per eye it offered on its previous system.

With this, Sony ensures that the games they launch for this system they will be seen with 4K resolution and HDR technology, being able to reach frequencies of 90 or 120fps depending on each game. In the field of view, we have a small improvement going from 100 to 110 degrees.

The other big improvement they have announced is that PS VR2 will be much easier to connect to the console, and you only have to connect a single cable. In addition, the hull and the controls will include motion detection systems to simplify everything as much as possible, although we will have to wait to see the design to draw definitive conclusions.

Finally, Sony has also given other details, such as the helmets will have an eye tracking system to know in which direction we are looking so as not to depend only on head gestures when showing us content. They will also have 3D audio to try to maximize the feeling of immersion.

Last March, Sony announced the controls of its future PlayStation VR equipment, and this is the only image we have of them in the absence of an official presentation. This is the PlayStation VR2 Sense, whose main asset will be use a haptic technology similar to the DualSense to transfer sensations from the game to your hands, as well as the adaptive triggers, which will complement the 3D sound that we will have in the helmets.

The controls will communicate wirelessly via Bluetooth, and will have a rechargeable battery whose capacity we still do not know. They will also have all the necessary sensors to accurately record our movements.

Finally, it has also been announced that it will be the first game to release the new generation virtual reality. This is ‘Horizon Call of the Mountain’, and it will be set in the world of ‘Horizon Zero Dawn’ and ‘Horizon Forbidden West’. The game will be in charge of expanding the universe with an adventure specially created for virtual reality, and that is being developed by Guerrilla and Firesprite. 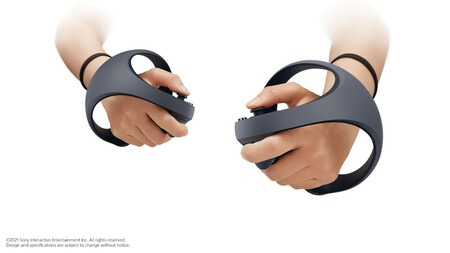 At the moment, we have not seen more than a small staging of the game, but it is certain that in a short time we will begin to know more details. What we do know is that in the adventure we will control a new character created for this game in the first person, although we will be able to meet Aloy during the game, the protagonist of the main games.