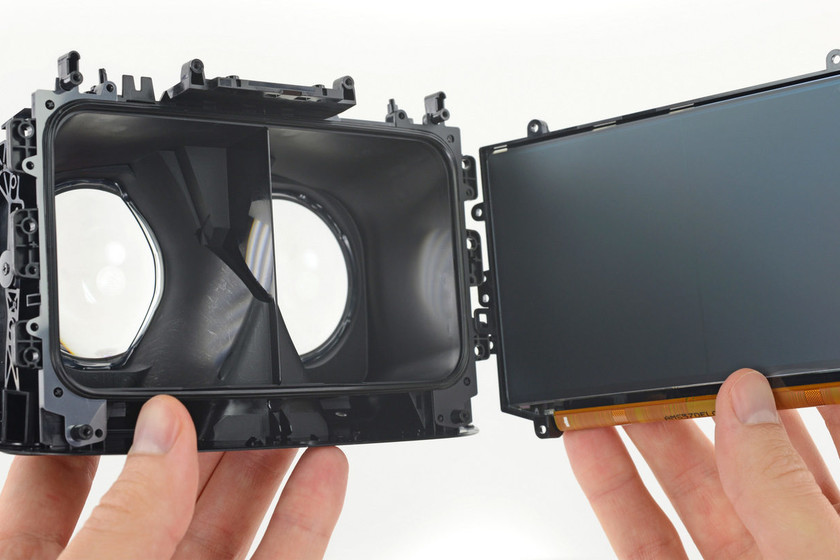 How virtual reality glasses work inside

Virtual reality takes over 60 years trying to disembark in our lives. And it is that despite the fact that it has been in recent years when companies such as Oculus, HTC, Valve or Sony have shown us their commercial products, the first patent dates back to 1957, when Morton Heilig described his Sensorama, a “stereoscopic television device mounted in the head”.

Since then, virtual reality headsets have evolved, they have become smaller and allow us to detect our movements, but their operation is based on the same physical principles. Here we explain how virtual reality glasses work, what internal components they have and how they manage to reproduce the images in front of our eyes to generate that effect.

Tricking the brain to reproduce the image

The main objective of virtual reality glasses is to trick our brain into believing that we are seeing a 3D image. To achieve this, what they do is take advantage of a stereoscopic screen. The technique basically consists of show two slightly different angles of a scene to each eye, to simulate the depth. This is why on screenshots it appears as if the image is repeated twice.

To complement this sense of depth, the virtual reality content is also adapted. We have for example the parallax effect, where distant objects appear to go slower.

We have two different styles of VR glasses. On the one hand, those that work independently and those that need to be connected to a computer to be able to manage the high graphic requirements. Fortunately, with the improvement of mobile processors, it is becoming more and more common for VR glasses to be able to work alone and offer a low enough latency not to cause dizziness.

The screen is the main element of virtual reality glasses. Again, we have those helmets where “everything comes” and other glasses where the smartphone screen is used. In this second case, we can only use phones that fit within the limits imposed by the helmet itself. Models such as the Samsung Gear VR have fastenings so that the mobile does not move much, but Usually we will get a better experience in those glasses that have an integrated screen.

The quality of the panel is important, since the more definition and quality the better immersion we will obtain. Inside the glasses we have the panel a few centimeters away and this component can make a difference.

To adjust the image we have a series of “corrective” lenses, with different thicknesses and curvatures. This results in different fields of vision or ‘Field of View’ (FOV). Normally, the field of vision of people is usually around 180 degrees, and can reach up to 270 degrees if we move our eyes. But in the case of glasses, the field of vision is smaller.

With the HTC Vive we reach 110º and the Oculus Rift S with its QuadHD panel offer 115º field of view, although these technical data do not always represent actual experience. Companies still seem to be far from offering devices with a field of vision equivalent to ours, in order to achieve a more realistic simulation.

Virtual reality glasses need some kind of tracking in order to work. And that is precisely the idea; that the image adapts depending on how we move. This requires a chip capable of tracking rotation. We have two tracking styles: the head and position tracking.

Common sensors such as the gyroscope, accelerometer or magnetometer. They are 3DoF glasses, capable of analyzing when we turn our heads up and down or sideways. But if you move your whole body, the glasses are not able to differentiate it.

A second style of glasses are the 6DoF. These allow us to detect when we are moving around the room, achieving a much better immersion effect. An example is the Samsung Odyssey+, which incorporates a double AMOLED screen and wireless controls with which to transmit movement. In models such as the HTC Vive, there are a series of external cameras together with infrared sensors to register this space.

In the case of the HTC Vive Pro Eye, a sensor for tracking eye movementscapable of following our gaze and allowing us to move through the menus without the need for an external physical command.

The industry continues to search for new experimental sensors. One of them we know through Oculus and the University of California and is able to identify our facial expression.

Other components for design and sound

In addition to the tracking sensors, lenses and screen, virtual reality glasses incorporate extra components such as microphones for a better listening experience. In this direction, spatial or 360 sound is attracting a lot of attention, which allows generating an enveloping effect that synchronizes very well with the content in virtual reality.

Finally we have the actual components of the body of the glasses, such as the adjustment systems for our headfastening straps and pads to distribute the weight.