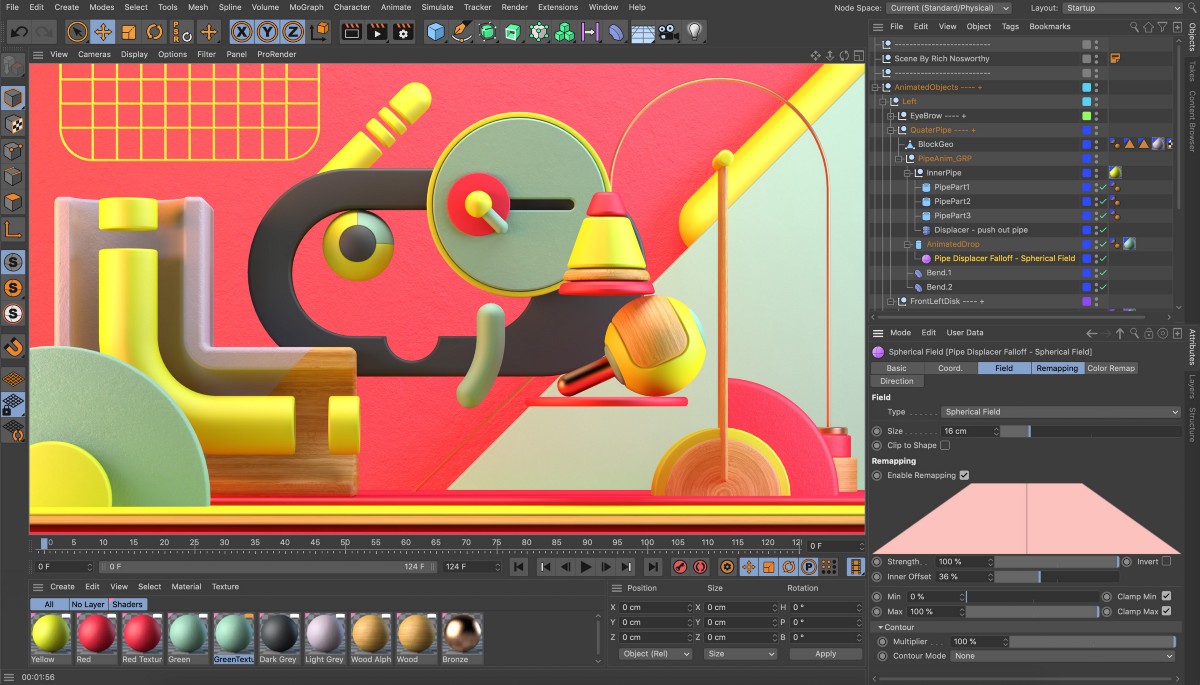 After a long time wanting, I have finally managed to get down to work and start learning 3D. In addition to what’s cool and the things it can bring you as a designer, I think that in a few years, when AR and VR are more mature, understanding and being able to work in a three-dimensional environment is going to be something very valuable, perhaps similar to what happened with the off and the online.

One of the things that has cost me the most when starting is how complex and immense this can be. There are many things to learn, courses, a thousand tutorials… so after three months and my personal experience as the only guarantee, I share this post with some of my learnings.

After doing some research, I saw that people who did the things that I liked and that I wish I could do myself used all Cinema 4D. Also it was the most recommended option for designers because it was the most accessible first, and most of the courses and tutorials that interested me were made in Cinema 4D. So I didn’t have to think about it too much.

In addition to Cinema, it is possible that, at least in the medium term, you will also want a rendering engine external. Although you can start learning with the Cinema render engine, and in fact it is certainly even recommended to understand the basics, the vast majority of super pro and super cool finishes use one of these engines, to which we must add that allow you to see the render in real time in low, something very useful when you don’t know very well what you’re doing at first 🙂

There are a ton of options here: V-Ray, Arnold, Octane, Redshift… and as a super newbie, I don’t have a set criteria for comparison. What I do have clear is that I am going to opt for a GPU render engine (GPU Rendering)

At first I thought of using Octane: Many 3D designers that I like use it, there are quite a few tutorials and it seems that it is easier to learn at first, but after a couple more laps I am considering starting with red shift since Maxon, the company that develops C4D, has bought it this year and it looks like they are going to include it natively. Also, from what I have read and seen in comparisons, it has nothing to envy Octane and there are also quite a few guides and tutorials.

This has been something that has given me many headaches.
The whole point is that to use these render engines you need a GPU, but be careful, an Nvidia brand GPU, because both Octane and Redshift are only compatible with these.

This directly affects Mac users as Apple only allows you to choose AMD Radeon graphics cards, (not supported) even in the current Mac Pro. Although Octane developers have announced that this year, with the release of Octane X, it will finally support AMD GPUs that are built into macs (including older iMacs). Until then, if you are a Mac user, you have no choice but to buy an external GPU card.

Anyway, if you want more alternatives, I have found this guide to make you a PC optimized to use cinema 4D and GPU rendering with a lot of information and performance comparisons, which is what I am going to do.

Although incredible things can be done, you have to take it with patience. The change of environment and the learning curve at first can be quite steep. Like everything, you end up doing it over time, but more than once I’ve felt like throwing the computer out the window.
On the other hand, the amount of stuff you have to master at first is overwhelming, and in fact, it can be a bit daunting, but the truth is that once you start it’s a lot of fun and soon you’re doing cool stuff.

The Internet is full of tutorials and it is easy to fall into the temptation of doing them in order to have quick results but I I think it is essential to take an introductory course to understand the bases and possibilities offered by the program and from there go advancing in what you like the most. I, after taking a face-to-face course, am focusing on learning:

One of the things that I have found is that most of the courses are focused on people who want to train as a 3D professional and their specializations, for example, we can take a look at what Trazos offers to see it.

I was looking for an introductory course that was affordable in length and that would allow me to understand the basics so that I could then advance on my own. The closest thing to what I wanted in Madrid, I found it at the Fictitia school, which has an introductory course (45 hours) that is quite good and serves to have a first contact. Sometimes you can feel like you don’t have time to go into some things, but having that overview I was talking about earlier has helped me a lot.

By the way, if you know any other place where they give face-to-face training to get started, share it 😉

We are at an ideal time to be curious and want to learn. The internet is full of great content, but it can be hard to choose from so many options. I leave you some of the things that I think are worth taking a look at.

Most of these introductory courses are paid but as I say, it is totally worth spending what they cost.

GSG is a website with lots of courses, tutorials and resources (the latter for a fee) that is great. They just released a teaching platform with a monthly subscription model that has top content, a Slack channel with access to teachers, and a few other things. I have subscribed and it is the platform that I am going to use to continue learning.

In addition to paid content, it has lots of free stuff, like this introductory course that makes a very complete tour of each part. Without paying, the best option for my taste.

Other pretty cool people and a very good looking bootcamp.

Perhaps less complete but they also have very interesting content.

If you don’t get along with English, Domestika has launched some introductory courses that are not bad at all and are quite cheap, although they can fall a bit short in some things. They also have other courses on more specific topics.

There is a lot of content here, but the truth is that I have a hard time separating the grain from the chaff. I think it can be more useful in order to delve into more specific things.

After doing one of these courses you can start to go deeper. For example, I have found these more specific courses on rendering engines and particles.

I put them in last place because I think it is the place that corresponds to them. Tutorials are great for learning specific things once you’re more or less able to get around and know what you’re doing beyond following the steps. There is an infinite world of options here. I am subscribed to a few youtube channels among which are these: