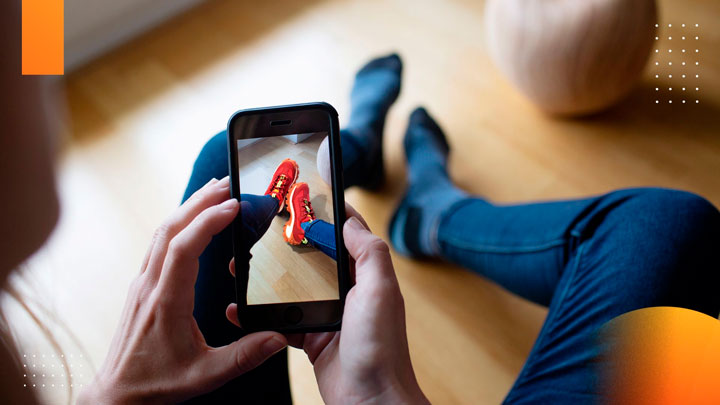 🗣 But first: What’s the difference between 3D, AR, and VR?

Put simply, augmented reality places virtual objects within real-world environments. The much-hyped virtual reality is an artificial environment that replaces a real environment. And lastly, 3D images are photorealistic representations of real-world objects. They’re also the cornerstone that AR and VR technology rests upon (more on that later).

The question we’re here to answer is how 3D, AR, and VR can benefit both eCommerce merchants and their customers.

According to a study conducted by UPS, 27% of consumers returned goods because they were “not as described.” By allowing customers to virtually “try before they buy,” you’ll give customers more information to decide on and, in turn, reduce return rates.

The power AR has for merchants is that it allows customers to preview what something would look like in their space or on their body as though they were actually in front of that product in a store.”—Daniel Beauchamp, principal engineer of VR/AR at Shopify.

But Beauchamp notes that even if you’re not ready to go the full hog, investing in 3D models of products (the first step in AR and VR creation) can still have huge payoffs. Unlike a photo, which only stores pixels, 3D models store information about the structure of products and the material they’re made of. They also let customers answer questions that an image alone can’t—like what a product looks like from different angles—to gain more confidence in their purchasing decisions.

AR gives customers who typically shop online the chance to view and interact with products in the same way they would if they were visiting a physical store. This may be part of the reason why AR experts such as Papagiannis are predicting that the next phase of AR will likely be a “gamified social experience,” such as a digital storefront or virtual closets where you can shop or explore with a friend.

As the capabilities of VR improve, merchants may be able to play on this to engage with customers in different ways. Beauchamp gives the example of shopping for snowboards: “Would you want it to look like you’re inside a virtual mall with fluorescent lighting and tacky carpet? Or would you want it to feel like you’re actually on a mountain in the snow? Suddenly, a brand can put you in a story that their products tell—and that’s incredibly powerful”.

At the moment, video is considered crucial in eCommerce. Instructional videos that help customers better understand products increase the time spent on a site and improve conversion rates.  If you’re already sold on video, then consider this: according to 2020 research by Vertebrae—which specializes in AR and 3D eCommerce—conversion rates increase by 90% for customers engaging with AR versus those that don’t.

Two years from now, we’ll be able to cite strong studies indicating that AR has a similar effect. Already, we’ve seen preliminary indications that this is the case—on some Shopify product pages, 3D models in augmented reality have increased conversion rates by up to 250%.

Decision fatigue? Nah. Your customers want to explore products in different colors, designs, and patterns—which is easier to do with AR. All you need is one 3D model.

It’s for this reason that 3D model creation can also have a better ROI than traditional photography, as HORNE furniture co-founder Ryan Walker pointed out in his discussion with Beauchamp at Shopify’s Commerce+ event. Photoshoots require renting a location, hiring a photographer, and spending a few days shooting, but you only end up with a handful of images.

Now, 3D designers create a rendered world in which we can place objects and move them around and choose exactly how we want everything to look.

3D technology can even be used by merchants to create new products. Rather than sending sketches to a manufacturer, who then creates a prototype followed by rounds of revisions, the process can be sped up by creating a 3D model of the concept. This allows merchants to be more responsive to customer demands and e-commerce market trends.